All handcrafted items are individually made to order by an artisan. Please allow 5-7 working days for your personal piece to be crafted. Due to complete creation of each item by hand, some pieces are not stamped with a 925 mark. If you have any special requests or for this item to be made in Yellow or White Gold, please contact our customer care.

Genuine handcrafted 925 Sterling Silver miniature of the famous Mjölnir the Thor's hammer amulet found on Scania island with two ravens perched on it. That was an island where the Viking's pagan religion mixed freely with Christianity, and it is a place where many archaeological discoveries and artifacts were uncovered, such as this Mjölnir. This is a double sided pendant. Included with the pendant comes a comfortable black cord for ideal wear of this piece.

In Norse culture, Thor's hammer Mjölnir is an iconic weapon of the Nordic God of Thunder. By legends, this hammer was the most powerful weapon in existence, capable of leveling mountains with a single blow. Being one of the most prominent representations of Thor and his godly strength, the iconography of this weapon was widely popular amongst the Norse and was used widely for religious practices and rituals. Akin to the crucifix, Mjölnir was used for blessing the holy events such as marriage or worn by Nordic warriors to grant them strength and protection in battle.

Ravens were popular in Norse mythology as Odin’s eternal companions that he created to assist his wolves with their hunt. The first two ravens were named Hugin and Munin, memory and thought, were eyes and ears during Odin’s travels across the world. Amongst his many names Odin was also known as the raven lord and these birds of prey were highly regarded in Nordic society, often depicted on charms and drawings as a sign of wisdom and foresight.

This Pendant is Very Beautiful, Very Well Made and Very Detailed, The string it came on was way too short for my Thick Head and Neck, My only Issue is the Size of the pendant, It was about the size of a quarter and I like my Pendants Bigger. If i could reorder possibly again with a piece about the size of a Half-Dollar Coin, I would be willing to pay even More for it and is pretty much the only reason this was rated a 4/5 BUT im a bigger Viking Man so Dont let this review stop you from purchasing this exquisite Piece from them it is worth it. I just wanted one that was twice the size, but if you cant tell from the giant glove I have for a Hand thats actual size. Still wear it daily and recieve daily compliments on it and am Happy with it! 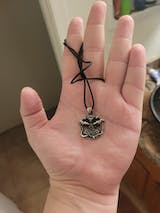 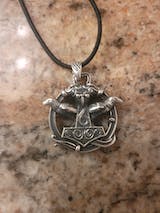